The Flemish Government wants to gain experience with the use of composite as a building material with these bridges. That is why the bridges are already equipped with built-in sensors during production with which the stresses and deformations can be read. Once placed, a number of test loads were carried out, after which the measurements were compared with the previously made calculations. And it turned out that the bridge behaves in an exemplary way!

BRUGES (B) – Today the world’s longest FRP bridge was installed in the early morning. In the night before, the 42-meter prefab construction was transported from Rotterdam (NL) to Bruges via a guided transport on the Dutch and Belgian roads, after which it could be installed immediately at sunrise.

To replace the outdated wooden Canada bridges in Bruges, Belgium, FiberCore Europe supplied two prefab FRP bridges, including railing, for De Vlaamse Waterweg and West Construct / Besix. With a length of 42 meters, it is the longest one-piece FRP bicycle / pedestrian bridge in the world. This second bridge is a fraction longer than the first bridge, which was transported and installed a month earlier, thus breaking the world record again.

Sustainable solution
These durable bridges have a lifespan of more than 100 years and hardly need any maintenance. The FRP bridges are particularly robust, lightweight and durable. The bridges are insensitive to external influences such as rust, rot and corrosion due to thawing salts. Graffiti is also easy to remove from the bridges.

A special transport
The bridges are manufactured in the FiberCore Europe factory in Rotterdam (NL) and complete their journey to Bruges by road. This is of course a very special transport and to prevent nuisance it was carried out by the Dutch transport company Westdijk BV during the night of 25 to 26 March 2019. This convoi exceptionnel with a total length of 47.8 meters was supported by two accompanying vehicles and here and there a lamppost had to be removed. For comparison: the length of an average Boeing 737 is 35 meters!

In the early morning of March 26, the bridge, weighing only 22 tonnes, arrived in Bruges, where the bridge was hoisted into position by a crane stationed on the adjacent concrete bridge. After installation, the bridge is in fact immediately ready for use.

Sensors
The FRP bridges in Bruges are a pilot project with great potential for the rest of Flanders. Sensors are installed in the second cyclists / pedestrian bridge. With the help of these sensors, the Flemish government hopes to learn a lot about the design and behavior of these bridges, so that more can be used in the future with FRP as a construction material. Concrete and Steel expertise from the Mobility and Public Works Department was closely involved in the preliminary design of both bridges.

The original Bird Ridding Footbridge was a 15m long bridge close to Coverham in the District of Richmondshire, North Yorkshire. The bridge crossed the River Cover and was removed late 2015 due to continued use even after being closed as the bridge being deemed unsafe to serious corrosion issues. The bridge was a single span steel bridge built which was built on a concrete abutment 1m deep which was then sat on a stone wall.

In February 2016 North Yorkshire County Council tendered a design and supply project for a replacement FRP Bridge, which was won by Lifespan Structures.

The contract required that the bridge should be designed to the requirements BD90/05 and relevant Eurocodes. The proposed bridge was based on a resin infused FRP system utilizing InfraCore technology.  The span was 14.7m with a 200m longitudinal radius, a total section depth of 600mm and a clear width of 1.2m between parapets.  The FRP bridge deck allows for the installation of a 1.15m high, powder coated, galvanized steel parapet to be installed on the outside end of the deck.

The outputs from the design process were;

The installed bridge deck weighs 3500kg and the galvanized powder coated steel parapet weighs 1050kg. Access to the remote location meant that installation method needed to be considered, and the lightweight nature of the FRP deck allowed the bridge to be lifted into position using tracked mechanical excavators.

The FRP bridge deck was lifted into place and the handrail installed insitu.  A slip resistant surfacing material is applied to the wear surface of the bridge during the manufacturing process.

In the Norwegian town of Taraldrud we installed a sustainable FRP ski bridge. The bridge connects the Police National Emergency Preparedness Center with the surrounding areas and can be used throughout the year without hindrance due to its width and unique properties.

The bridge is part of the newly to be built center for emergency services and would be executed in concrete according to the first plans. Client Ministry of Justice and contractor Skanska, however, opted for a sustainable and innovative solution; a lightweight, maintenance-free FRP bridge with a special and practical design from Nordic Office of Architecture.

The bridge was delivered and installed by Module Solutions & Systems (MSS) and produced by the Rotterdam-based FiberCore Europe (the Netherlands), where the bridge was prefabricated in-house after calculation by our own engineers. FiberCore has already produced hundreds of bicycle and heavy traffic bridges in the Netherlands and far beyond, but this is the first ski bridge.

FRP is ideal for the intended function of the ski bridge. The material is insensitive to external influences such as rot, rust, salts and extreme cold or heat. The prefab bridges are lightweight and therefore easy to transport and install. This 22-tonne bridge would have weighed about six times as much in a concrete version. The bridge is with a length of 20 meters and a width of 4 meters calculated on the load of half a meter of snow, plus the weight of a snowplow.

The eye-catching railing of the bridge serves several functions. The special plating on the inside of the ski bridge keeps the snow in place and prevents melt water from running on the underlying motorway. The special curved outer plates serves, apart from the aesthetic value, also for safety. The railing is modular design by FiberCore Europe and can be replaced quickly and easily in the event of damage.

Westdijk Transport transported the bridge by special transport by truck (and ferry) to Norway, where the bridge was be placed in no time with two light cranes and put into immediate use.

The FRP ski bridge is extremely robust and with a lifespan of more than 100 years also a sustainable solution.

Schiphol Logistics Park officially put the composite biobased bridge on the logistics business park in Rozenburg (NH) into use in 2018. Schiphol Logistics Park, FiberCore Europe and TU Delft have joined forces for this special pedestrian bridge. Never before has it succeeded in producing a bridge construction in a regular building process with such sustainable products. The composition of the materials makes the bridge innovative and special.

The bridge deck is produced as biobased as possible. Basalt fibers and biobased polyester resin are the main raw materials of the bridge deck. Advantages of fiber-reinforced plastic (also known as FRP) over traditional building materials are their high strength, the low energy requirement during construction, the low maintenance requirement and the long service life. In addition to being safe, it is also a sustainable building material. The structural properties of the material are not subject to rot or corrosion. As a result, the material is expected to last for at least a hundred years, and does not have to be replaced and minimally maintained in the meantime.

Basalt fibers are made from the basaltic rock, the volcanic coagulation rock that is created by coagulation of lava. The greatest advantage of using the basalt fiber over other technical fibers (such as fiberglass) is the strength of the material. Because the fiber is so strong, less material is needed and a lightweight bridge is created. In addition to the strength of the fiber, the material is also fully recyclable. Because it is a volcanic rock, the fiber can be melted down and extracted after the bridge’s service life, so that the material can be reused.

The resin used for this bridge is partly of natural origin. Polyester resin is made from a reaction of a large number of molecules with both a carboxylic acid and an alcohol group in the molecular chain. To make this, bio-resin glycol is used that comes from vegetable glycerin.

June 2018 – Nights are getting shorter as we close in on Midsummer-night, the ‘longest day of the year’. And that is a shame for our beautiful Netptunigatan bridge, which’s beauty is fully displayed in the darkness of the night, when she gracefully lights up the streets of Malmö (Sweden). Thankfully we made some pictures in our factory after dark, so you can see her in full glory.

With her white deck and LED-railings she is the ultimate proof of the design-potentials of FiberCore’s prefab FRP bridges. Because of her light weight she could easily be rested on Malmö’s historic quay walls and installed within minutes with just a light crane.

Because of Malmö’s marine environment the choice for FRP was an easy one, since the material is not susceptible to salts and hardly any maintenance is required. A sustainable solution!

Three FiberCore Europe FRP bridges with unique InfraCore® Inside technology have been installed in the Schoterbos city park in the municipality of Haarlem. The bridges that we are commissioned by main contractor Dura Vermeer Infra National Projects B.V. have been made are part of the major maintenance & refurbishment of the park. Other activities around the bridges are, among other things, improving drainage, digging new waterways, installing new bicycles and walking paths and major maintenance of the greenery. The bridges stand out because of the special handrails with which the bridges form a harmonious whole with the environment.

The new pedestrian and cyclist bridge across the Laak in Ninde (Tremelo) is open for use. The old steel bridge with concrete bridge deck was replaced by a lighter, safer and less maintenance one made of composite (plastic). This makes it the first composite bridge in the area of ​​jurisdiction of the Vlaamse Waterweg nv. The bridge spans the Laak at its mouth in the Dyle and thus forms part of the towpath along the Dyle. The former old steel bridge with concrete bridge deck was badly damaged and no longer satisfactory. For the replacement, the Vlaamse Waterweg therefore did not opt ​​for the classic wood or steel, but for a low-maintenance and sustainable alternative: composite. The new bridge is 10.8 meters long, three meters wide and weighs about four tons. It remains maintenance-free for at least 30 years and has an expected lifespan of about 100 years.

Or Use The Drop Down To Filter Through The Project List

You Can Also Use Keyword Search To Locate Projects

***All image captions are in reference to their projects*** 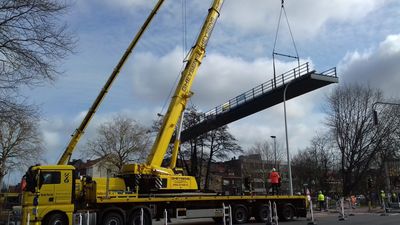 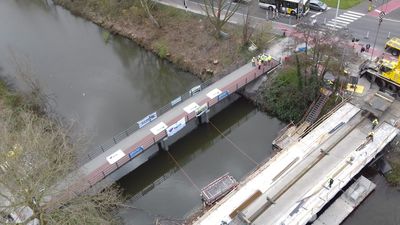 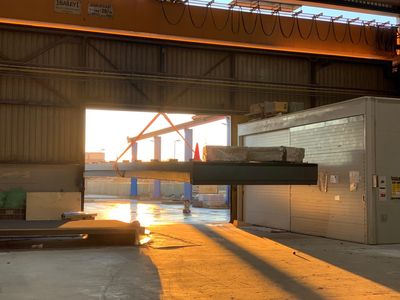 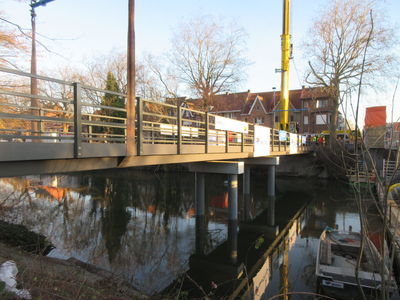 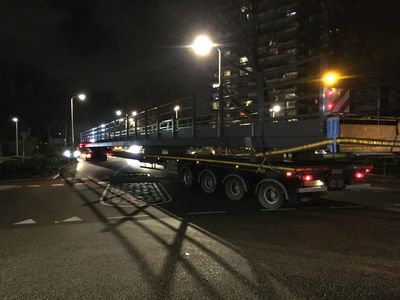